The process of four-stroke internal combustion is often described as Suck, Squeeze, Bang, and Blow. Today, Team Bender got the first part of that all right! I hope you’ll pardon me if I focus on our unique experiences today and not the progress of the race generally or the beautiful scenery and stops.

Two days ago, we had an instruction that said to turn left on the first paved road, but many teams missed it because it was a) small, b) gravelly on top, and c) had no name. Today, we had a similar instruction, and as we came to a road that had a paved apron (all we could see as we approached it), with a road name sign, and it was the first we came to; it looked like the one! Unfortunately, as I slowed (hard, I confess) and began to turn, we found the extension was gravel, and both the turn and recovery to straight became impossible! Bender took us down over a steep shoulder and wiped along a wire fence before coming to rest in a patch of tick-infested tall weeds (I picked four off while we were there). All safe, but stuck at a 45 degree angle on the bank and up against a post, almost. I couldn’t move the car enough to clear that post, so we figured it was sweep truck for us! But a friendly local in a big pickup stopped and asked if we’d like a pull, so we hooked up and with his tug and our engine, up we came! It happened so fast that I forgot to take a picture to prove it all, but Bender is now wearing some wire-scrape speed marks on his right side. No bent metal, but some paintwork is in order. Hagerty insurance has us covered! We were back in the race, though that leg was lost. 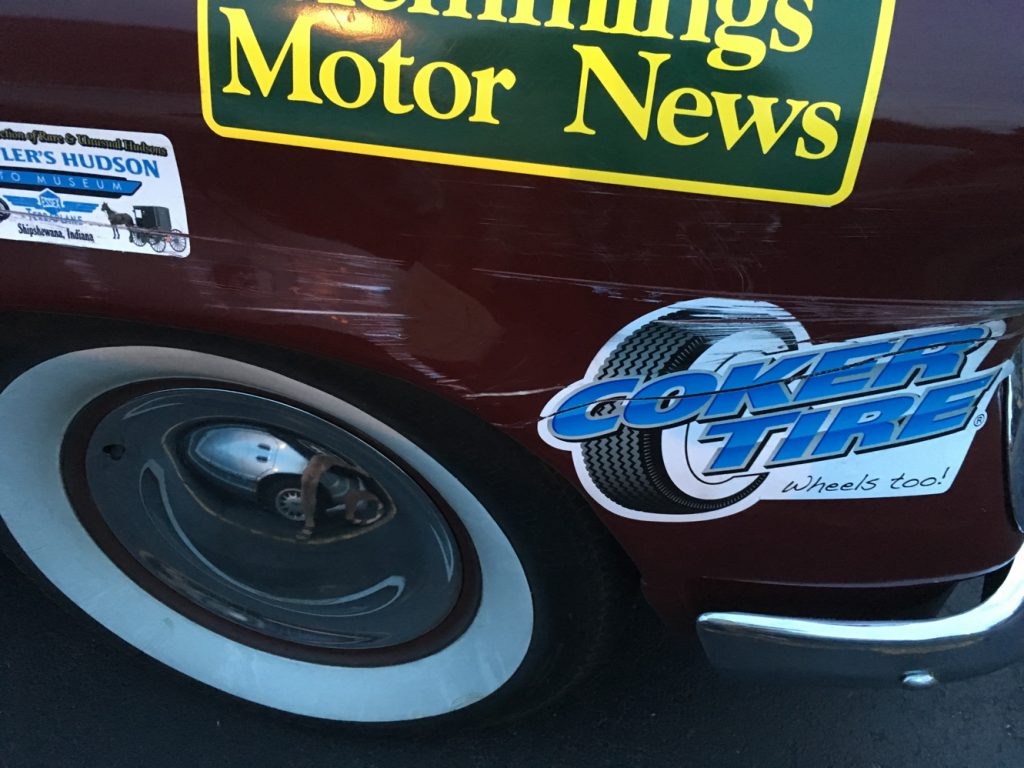 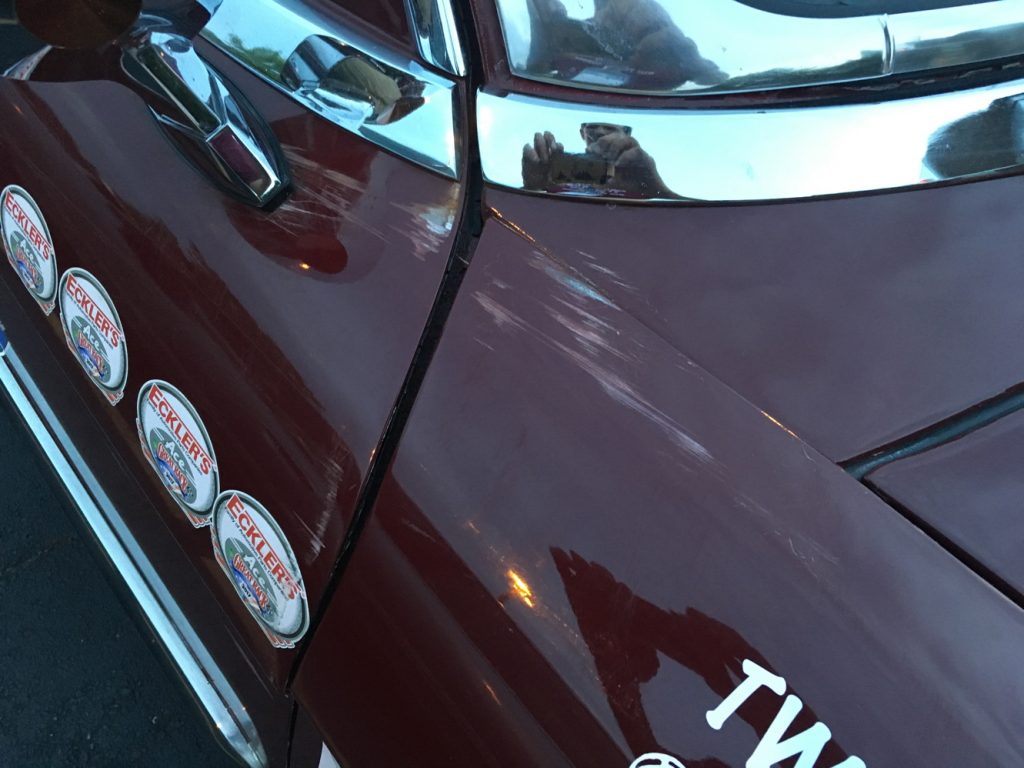 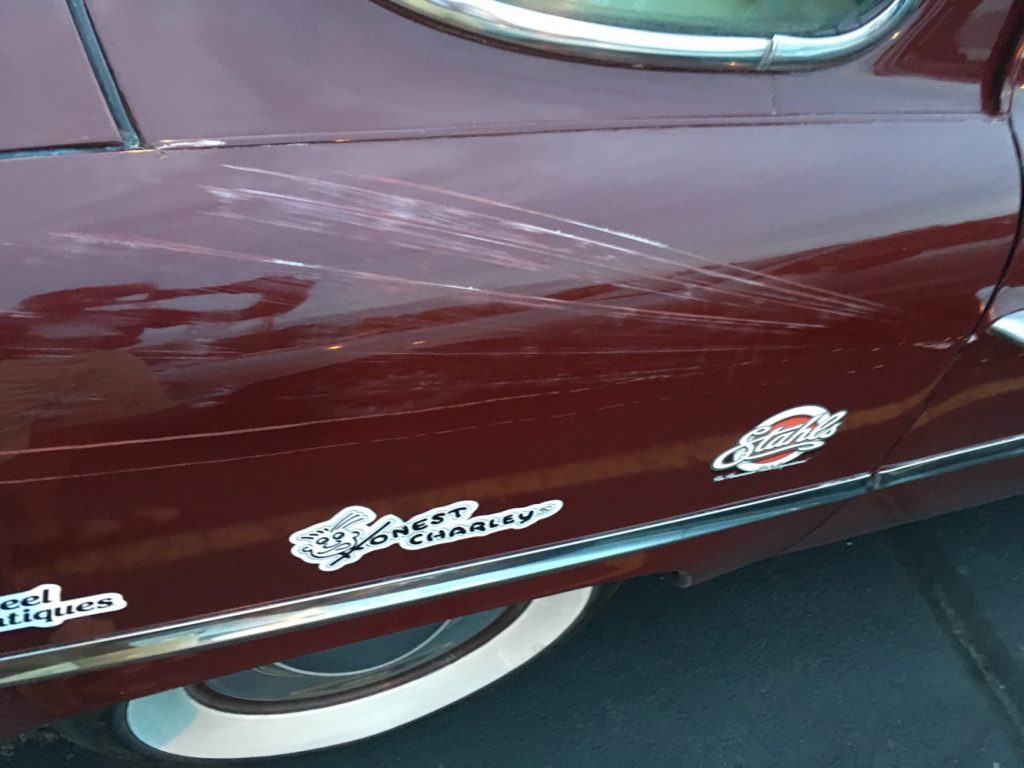 A checkpoint came soon after (when we got our scores, we found the ‘incident’ took about 18 minutes). Back on time in a new leg we proceeded to kick it well. We were using a modification to our cornering technique that we got from Ed Tourje, a veteran Great Racer here, as we think that was our problem yesterday: errors in lost time at corners. And in fact, we had pretty good times: 2 seconds early, 4 early, 4 early, 8 late, and then the 17 minutes and 57 seconds. But that one could be tossed out to give us a respectable day.

Alas, it was not to be. The next leg we earned 10 early, but the LAST leg got us: rounding a corner, the clutch pedal collapsed with a BANG, and not the kind of bang that makes engine power. As we were starting near last in order today, the next few cars passed and then Steve and Vickie (who patiently sit to hand out our directions each morning) came by. They called us in for the sweep truck, but found it was already full of three other broken cars. Jeff Stumb, our director said on the phone that he’d find us something. Meanwhile, we jacked it up, borrowed a stand from the neighbor there, and slid under to see if it could be fixed. What a weird mechanism! The cross rod that’s turned by the pedal to then push in the clutch release is retained (except when it isn’t) by a ball socket on a spring plate, maybe to take out some rattle or play? Anyway, that had popped out. I’d show you pictures, but it’s all dark under there and totally covered with assorted grease and grime.

Anyway, by the time a trailer from the Gilmore museum (which we had left a mere 11 miles back) arrived, we had the linkage reassembled. Actually, twice, as it popped out again after the first time. Something else was wrong. Rod from the Gilmore tried to winch it in but it was not rolling. The gear selector was locked up (the transmission was in reverse, even though the selector was in the neutral position). Those old three-on-a-tree selectors are known to bind up as they age. And Bender’s is notably aged. Hey, when they say they don’t make cars like they used to, remind them that beauty isn’t everything: these old cars were pretty, but pretty much shot by 100,000 miles, even with the required regular maintenance. But, still, we LOVE them.

Dale reached down in where the selector links go from the steering column to the transmission inputs and flicked them back into alignment. They desperately need new, snugger joint bushings! With that, we started off again, with me promising to shift VERY gently. It was too late to catch the last checkpoint, so we hightailed it for our evening stop in Ypsilanti and made it by 7 PM: the last car in but we did NOT fail to finish. One of the Great Race mottoes is “To Finish Is To Win” and another is “Ride, Repair, Repeat.” I think we lived both of those today, with a Finished No Score from John Classen (that happens when you miss the last leg), rather than a Did Not Finish.

We did have good two museum stops today – both very brief (for us as we were somewhat otherwise busied…). We stopped at the Hudson museum in a small town that (forgive me) is cannot recall the name of just now (very unusual name, too….). Our stop at the Gilmore was TOO brief, but astonishing. If you’re a car guy or gal, you MUST add the Gilmore to your bucket list. I have, and I’ll come back. I’ll show only one picture from the Hudson room – a prototype Stepdown pickup that never made it to production – who thought of THAT before El Caminos and Rancheros??? 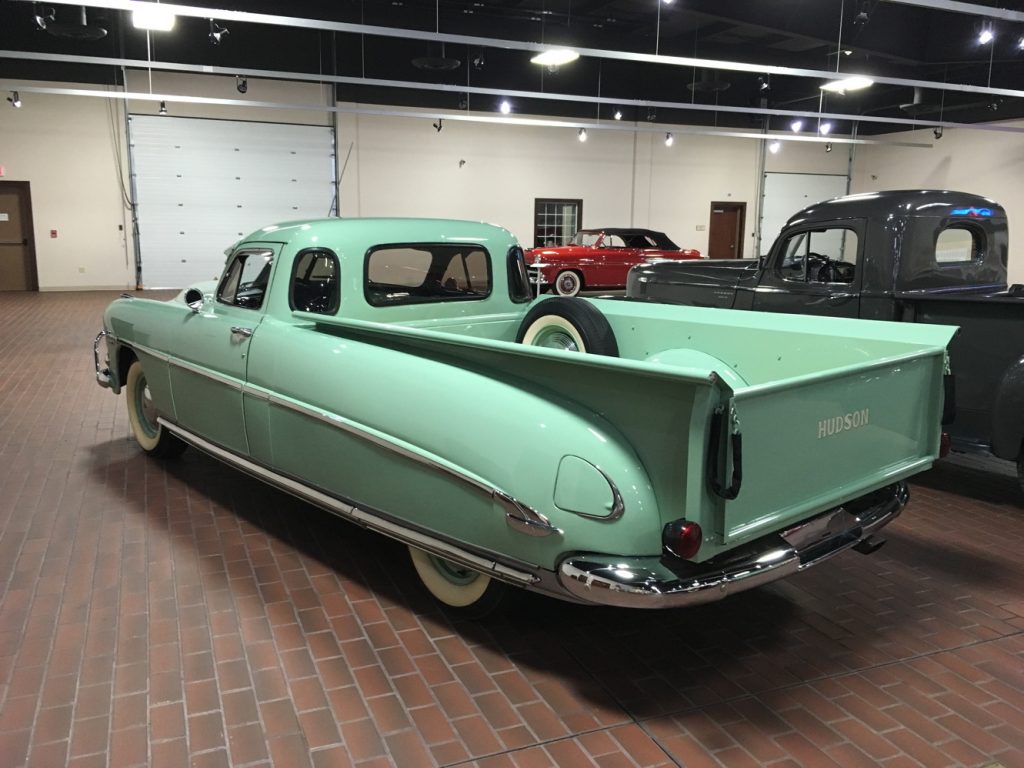 It’s been a hard race, not just on us. Several other cars broke down today and all told I think we’ve lost half a dozen that cannot finish. Also, The Pratt’s Chevy Fleetline was hit at start on day One, the Hudson’s Stovebolt Chevy was sideswiped, and Team Japan’s little Subaru 360 was rear-ended (lightly) on the freeway yesterday and the perpetrator never even noticed! All are safe and all three cars are bent but still running. It’s VERY unusual to have so much “carnage” on the Great Race. I guess we need a mender for Bender, but it’s only paint, no metal damage.

Ride, Repair, Repeat! To Finish is to Win!