The skies above were clear again,
and we could use third gear again,
Happy Days are here again!

Yep, the torrential rains were gone, replaced by that crisp, cool ozonated post-storm air that only the Northeast can deliver. We ran up the west flank of the Bay of Fundy, where apparently wild lupines grow like weeds . And they were all in bloom along the roads, Purple, Pink, and white – just for us! (sorry, I wish I might have stopped to get better pix): 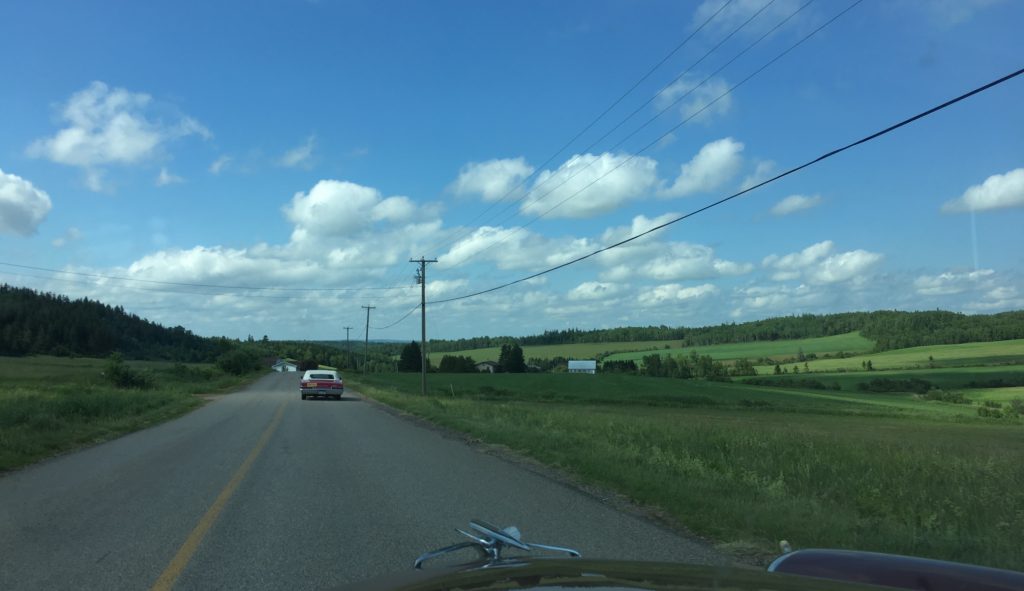 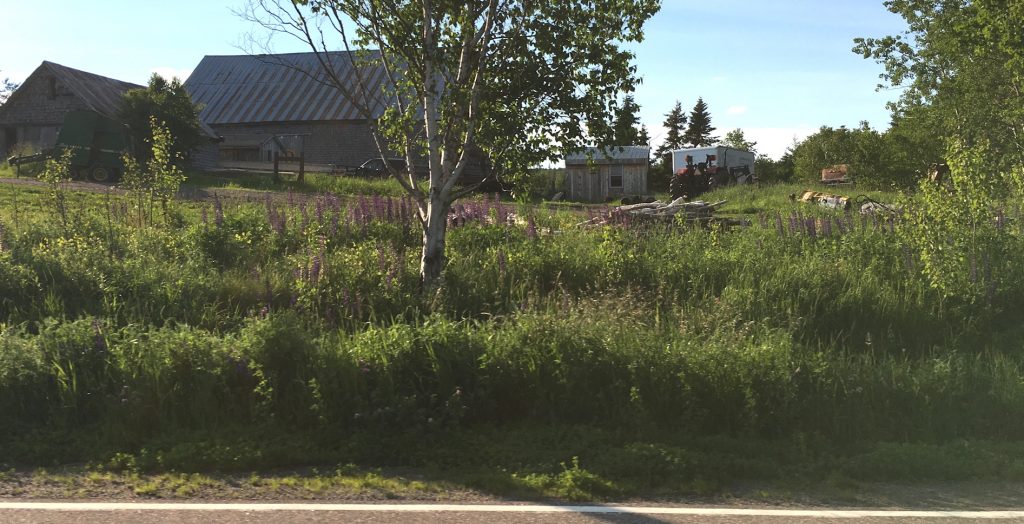 Lupines, a poor picture of ubiquitous beauties all along the roads in New Brunswick today!

Unfortunately, the heavy rains also meant a LOT of sediment was washing out to sea – the river beside us ran brown with it, and the marshes (we passed at low tide) looked like melted chocolate ice cream mud pies!

Mud-filled river running out to sea (from yesterday’s rains)

Bender was a mess this morning. And we made it worse, initially. Remember yesterday, he was bucking and missing a bit at high engine speed. After sleeping on it, I decided it had to be ignition timing and that we should at least change the distributor points, especially as that’s an easy 15 minute job and we had such a late start that the morning was available (and better than futzing with it the night before in the wind and rain and dark when the engine was still hot, too!). Well, the distributor on this engine is tucked in the valley of the V8, way back agains the firewall, and sort-of under the air intake. Very hard to even see, much less work on, unless you lie on your belly across the fender to look down on it. Dale did that and I wish I had snapped a picture for you. But once the new points were in and gapped, the engine wouldn’t even fire. Seems the condenser lead was shorted to the case, so apart again and reassemble again, and then it kinda started, but it would barely run and it stalled and had no power. Dale said time was up and had me get the car warmed up and brought around while he went up to get our bags. I watched him toss a bag in the back seat and off we went. About a mile down the road, he asked me if I had put my bag in the car. No, I said, you got the bags. AUGGH! I whipped the car around, but in fact, due to road construction, the way we came was partly blocked, one-way the other way, due to construction, so we couldn’t get there directly. I turned off onto the park loop road (many miles long), the only way back to the hotel, and knowing we’d miss our start time and lose the entire first leg at least; but just then a support van honked and pulled up to tell us the start was in the other direction. I explained the issue and Bob Whitney (Good Samaritan or Patron Saint of Fools Like Us), said for us to go on ahead, and he would fetch the bag (still back in our room) while we went on to race. What a relief! THANK YOU, BOB WHITNEY!!!!!!

So we ran the timing miles with the lightest of throttle (that’s all Bender would take) – fortunately, traffic was light and hills were few and slight, so we could hold the 50 mph for most of the way. Our speedo was running 4 seconds per hour slow (note that yesterday, we were late most legs). When we reached the start of the scored runs, I voted to advance the spark timing, just a bit (no instruments to check it). Boom- fixed, almost. We advanced it a bit more and suddenly Bender was BACK! Strong and smooth (and quieter – I think the late timing was blowing hotter exhaust out the headers, too). It seems the cam follower on the old points had worn itself so short that the new one introduced significant delay in the spark. Who knew? We really don’t go very fast in this event, but it is essential to be able to hold speeds, even up the steeper hills. The speed limits do seem a bit high here in Canada, too (OK, OK I know, it’s in km/hr – but it’s a bit weird to be told to drive at 50 when the limit says 100).

Holy Moly! They let us do 100 legally on this Road?

Another driver’s day, mostly. We put a lot of miles behind us, crossing from Maine, USA to New Brunswick, Canada in the AM before even starting our timing runs, so really the scored day was just the afternoon. Even then, one leg was cancelled due to the presence of sudden paving activity that reduced the intended route to a guided one-way alternate (introducing a miles long, many minutes delay). We also had a time delay for one busy highway crossing, where we couldn’t safely go when out appointed moment arrived. Time delays are always tricky, but we figure this one pretty well and the score shows it.

YESSSS! With a stable-running vehicle, we CAN still do this. A 6-second day, once 60–Second delay is fixed.

Lunch was brief at Rothesay. Dinner at the Moncton Arena (moved indoors due to a squall expected in the evening. Good food both places and good turnout, too. We were met by Studebaker fans and Bill Jarvis (president of the Drivers Club Atlantic Canada chapter) was there to greet us in Moncton. Thanks, Bill!

Lunch Stop on the Green at Rothesay, NB. 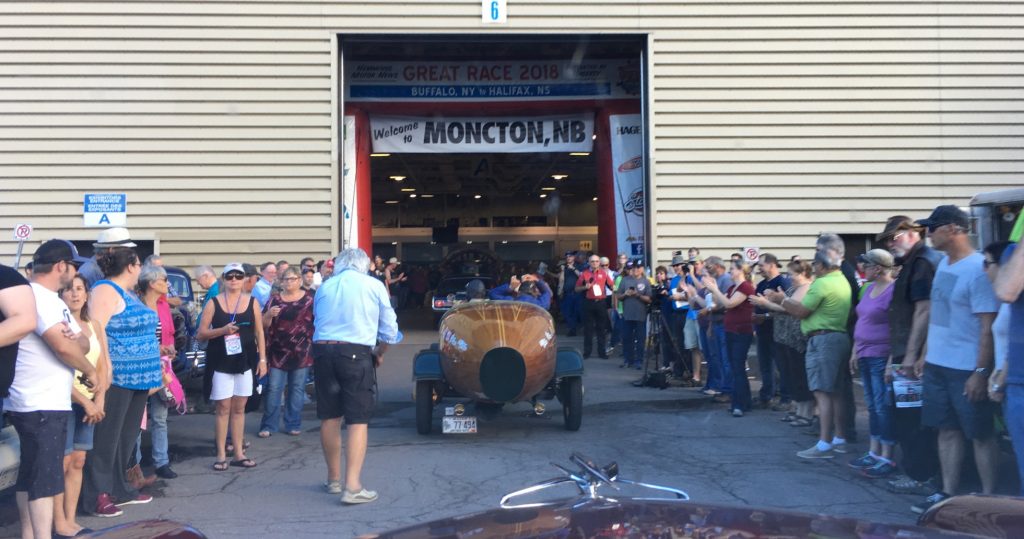 Pulling in to Moncton For Dinner Stop and Show.

Before we left the Moncton stop, we borrowed a timing light from Ken Creary, to double-check our best-guess on spark timing that we set that morning. Nope. Way off, according to the pulley marks anyway, which showed us to be almost 20 degrees too advanced! We tried to time it to the marks, but it ran terribly, so we put it back about where it had run well today. Weird. We may yet tweak it more tomorrow. The Dort brothers lent us a proper distributor wrench, which makes access a bit easier, so maybe tomorrow, we’ll tweak again? Maybe we’ll even score well again? Ride, Repair, Repeat!