Some Days, the Angels Sing Your Song! Team Bender: Wow.

Great Race rally days are all different. Early days are not as challenging as later ones, and the later ones are all challenging in different ways. Today, our last full day of rally action, was a fatigue-test day. It seemed less technical than yesterday, being flatter and with minimal double-back mazes, but it was more exhausting by its length and the relative emptiness of the countryside (funny, we started in the Georgia Pines and are ending in the Michigan pines, just Norther White vs Southern Yellow types). 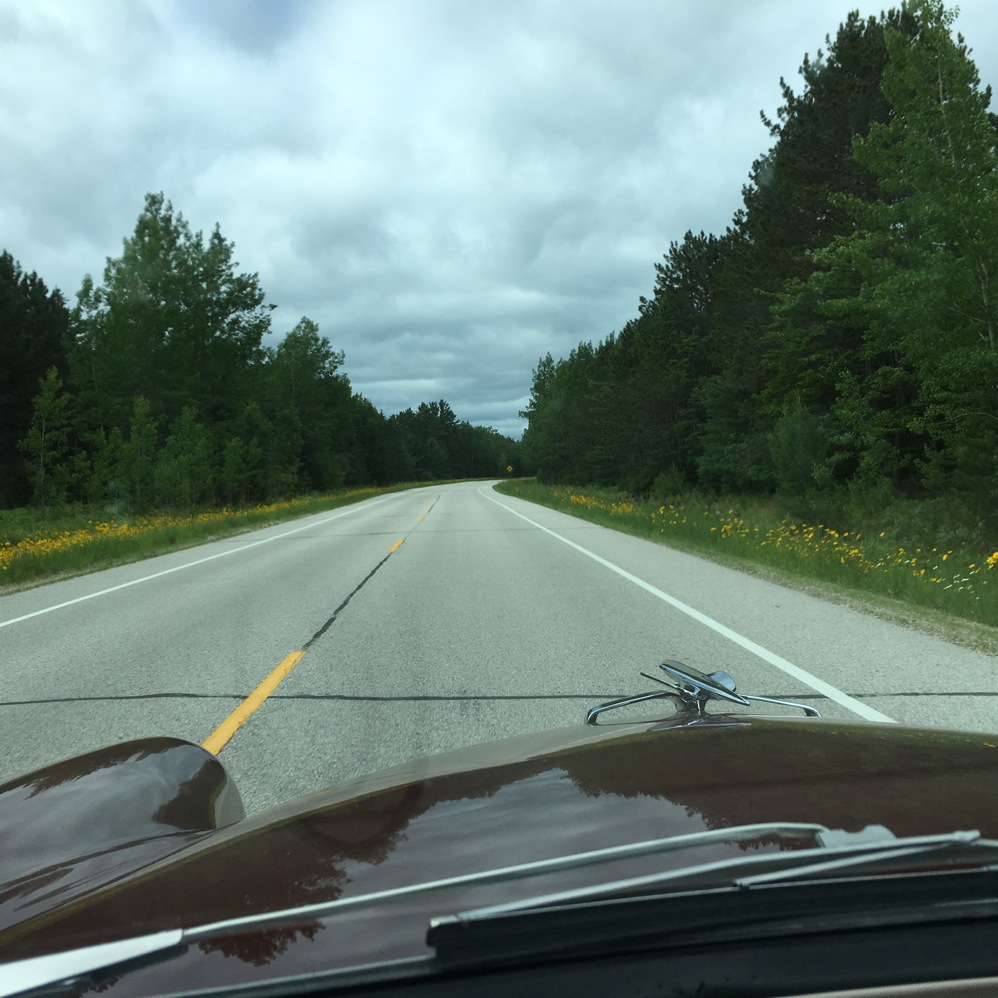 Seven legs were scored, as the last of eight had to be dropped due to unexpected back-up on the Mackinac Straits bridge that held up all of us (and thousands of other holiday travelers). We made only slight changes in procedure after yesterday’s debacle, but it worked! Today we were on our game, better than ever. With a 10 second raw and 9.2 second score for the day, we placed fifth overall today (!), winning the day in our Sportsman Division for a second time this year (!!). Notably, today and tomorrow are ‘Championship Runs’ so no dropping the worst leg on those days. Instead, it’s important to be consistent to net a low total. And we were: 1,2,3,0,3,1,0: Yep, two more aces (total seven !!!) and a mix of early and late. Yeehah, Indeed! As Motormouth would say if he were here, “How Cool Is THAT?!?!” Our trials and errors in earlier days are unforgotten, so we can’t move up much in the cumulative scores either with today’s success or tomorrow’s possibilities, but we are on Page One, in 49th overall and 18th in Sportsman. 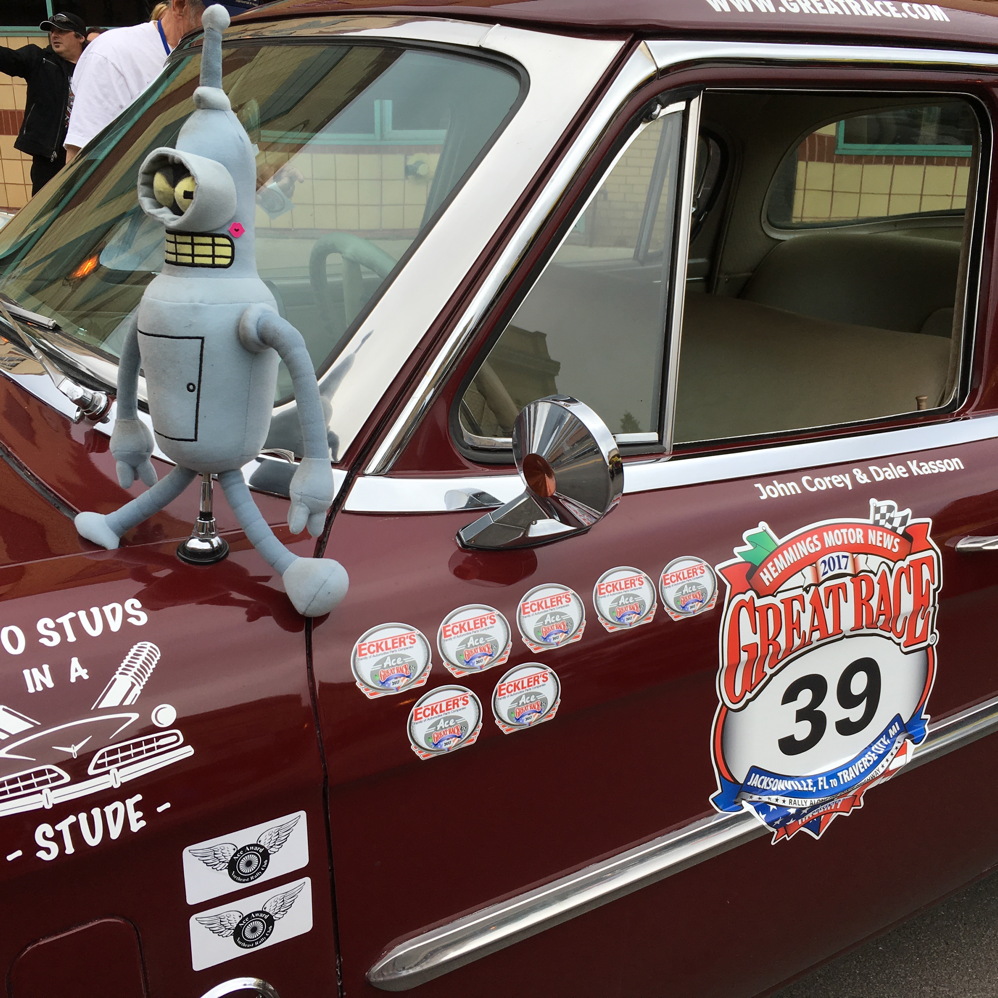 Most importantly, we came in with clean hands again – no issues with the car except a sticky throttle that required some averaging during speed-hold steps, and made shifting a bit risky if not blipped to slow the engine before clutching. Regular readers may recall this was present earlier this week, but it was definitely worsening today. The complex throttle linkage includes one rod with little ball joints at each end. They’re terribly worn and binding when the rod is under tension of the throttle return spring. To fix that we moved the spring perch back further up the linkage, so that the troubled rod need not carry that load. Smooth as glass! Unfortunately, it also produced a very unpredictable idle speed that varied from a few hundred to nearly 2,000 rpm. Hmmm… We consulted with Steve Hedke (another Great Racer with a Stude – though one fully 10 years newer), and looseness was found between throttle plate shaft and the bellcrank that is moved by that worn rod. The shaft is brass, so it was a simple matter of peening its end with a phillips driver and hammer, to spread the brass more tightly into the bellcrank plate. Perfect idle repeatability was achieved! Together, the non-sticking throttle and predictable idle should make tomorrow’s driving even smoother. 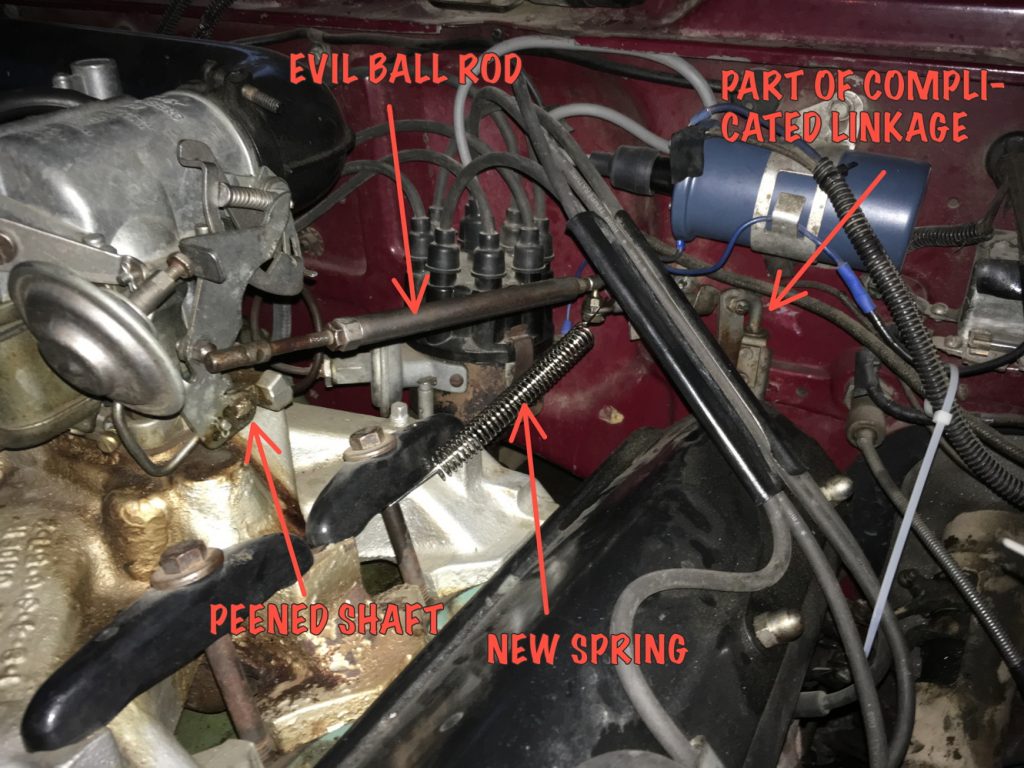 Yesterday, I mentioned the over-the-top Bavarian Lodge. Today, I’d like to also call them out for a very nice touch that I only noticed this morning. It’s easy to overlook the little things when you’re focused on the Great Race itself, but really, experiencing at least a bit the places we go is a big part of the purpose and value of zooming all over America in old cars. In the Inn, each guest room door has a number as well as a family name on it. Turns out, those names recognize the founders and builders of the town of Frankenmuth, and in each room is an explanation of the selection process and a brief genealogy of that room’s named family. I wonder how many of us noticed and read these. Or as Motormouth would say if he were here (and we do SO miss him), “How Cool Is THAT?!?” 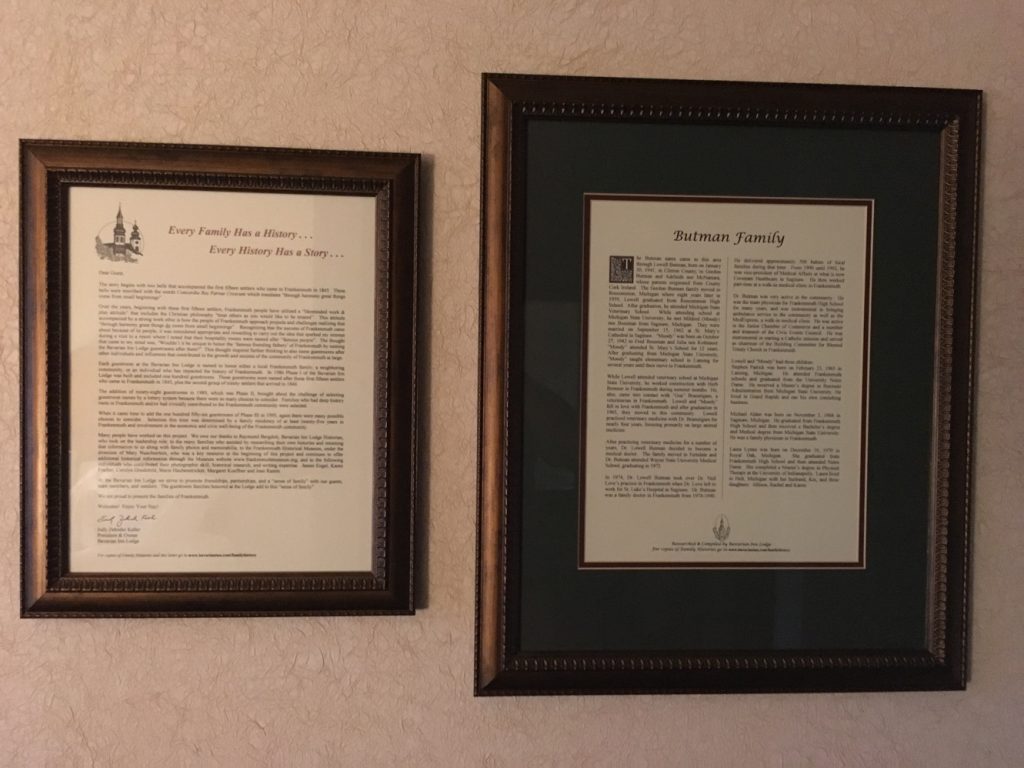 Lunch was great! We were treated to superb Summer food: juicy fired chicken, green beans, and cole slaw – all delicious – at the Yacht Club in Alpena, MI, on the shore of Lake Huron. A fast but satisfying stop! I did get one quick photo of the two microcars running this year, the Fiat Multipla and the Subaru 360 of Team Nippon – doing a friendly face-off. As Motormouth would say if he were here (and you bet he’ll be back!), “How Cool Is THAT?!?!” 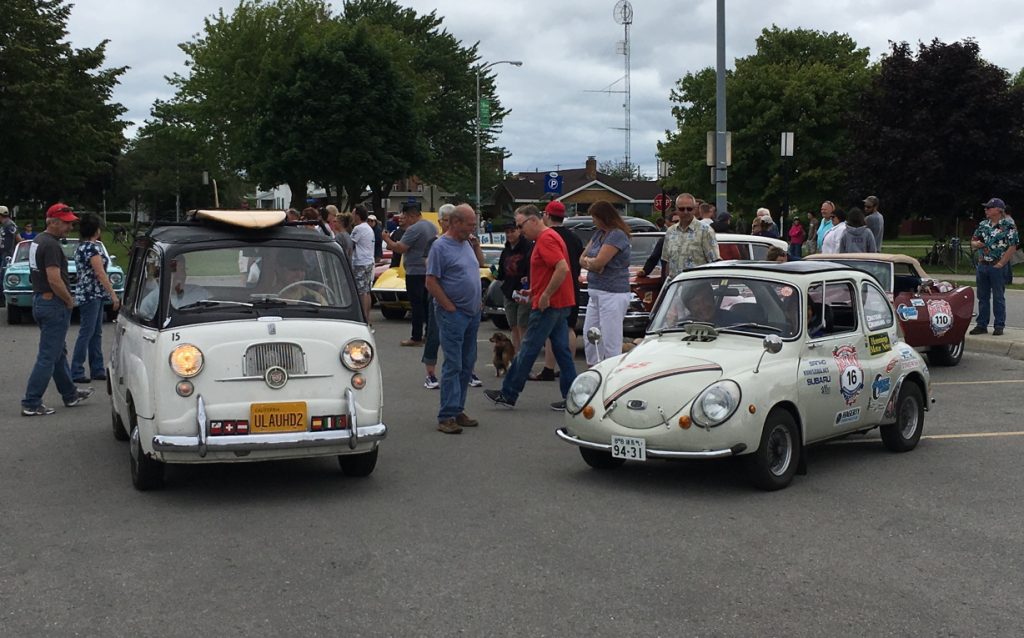 Dinner was also grand, especially the warm bread pudding for dessert – compliments of the host city of Sault Sainte Marie. A good crowd, too. I’ve really been impressed with how many people recognize either our Studebaker or Mascot Bender himself (rarely both, I guess it’s a generational thing). Either way, it’s fun to talk about them with the local folk who turn out for us. 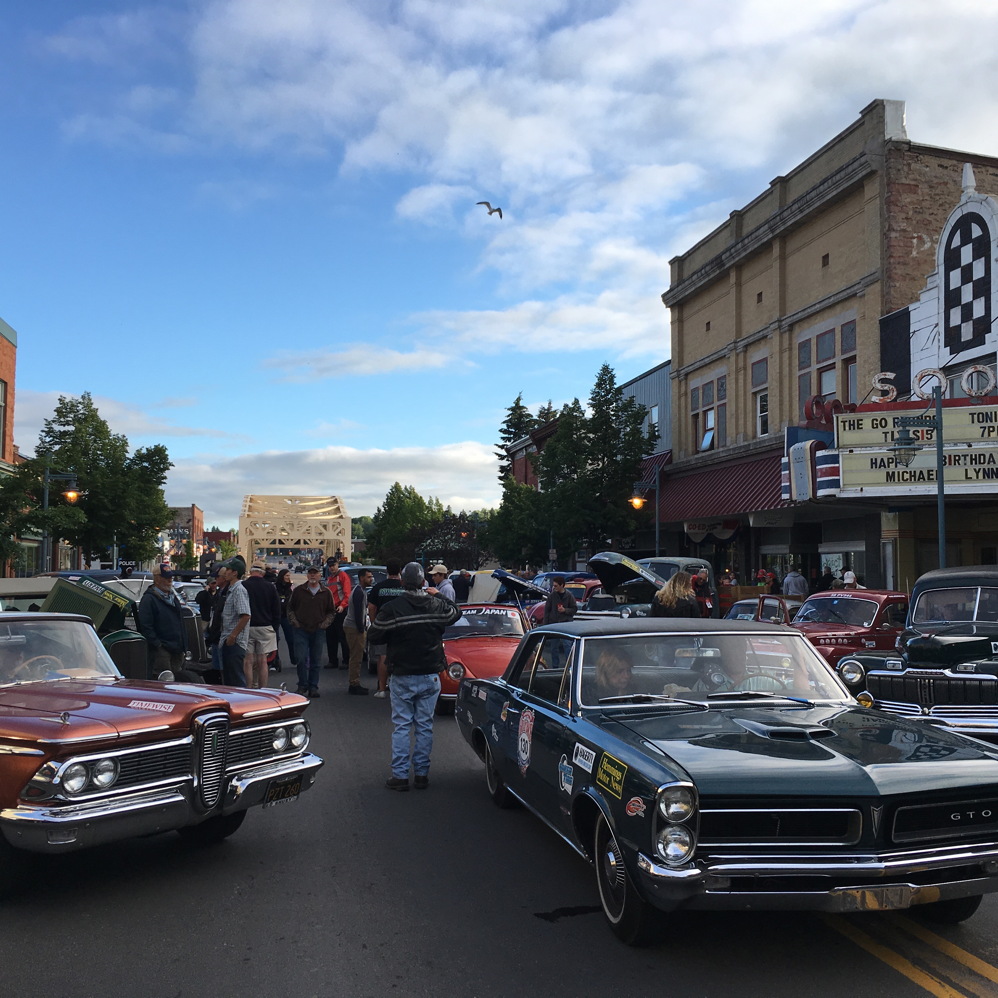 A Street Full of Great Racers in Sault Sainte Marie

Tomorrow is our last rally day and it’s really just a half-day on the road in scoring legs, as we will roll into our Finish at Traverse City. We started here in 2013 (I think), and had a huge, huge crowd (the most ever, bigly! ahem – it really was). We’re all eager to share this year’s Great Race with this enthusiastic bunch again. Traverse City is also home to our sponsor (and soon-to-be funder of Bender’s new paint work to cure the evil fence scratches), Hagerty Insurance. This is one GREAT company. I could write a book about them, all good. I won’t because I need to sleep tonight, too. Still, I’m looking forward to getting old Bender up on the lift in the Hagerty garage (graciously opened to us), to check the underbits before heading off homeward with my much better half, Sue, who’s meeting us at the finish.

Speaking of sleep, I got lucky again this evening. The hotel had filled all the regular rooms by the time I checked in, so they upgraded me to a suite larger than some apartments I’ve lived in. Too bad we’re not staying longer!

Well, that’s it today. If the level of wit and entertainment in these postings seems to be slipping as the Race goes on, my I refer you to the first paragraph here. Fatigue is surely to blame. Fatigue from a LOT of Fun (and some frustration). But today – we were redeemed! It IS possible to do this well, after all. Can we prove it wasn’t just luck by doing well tomorrow, too? Who knows? Tune in tomorrow, same time, different place.

6 comments about “Some Days, the Angels Sing Your Song! Team Bender: Wow.”