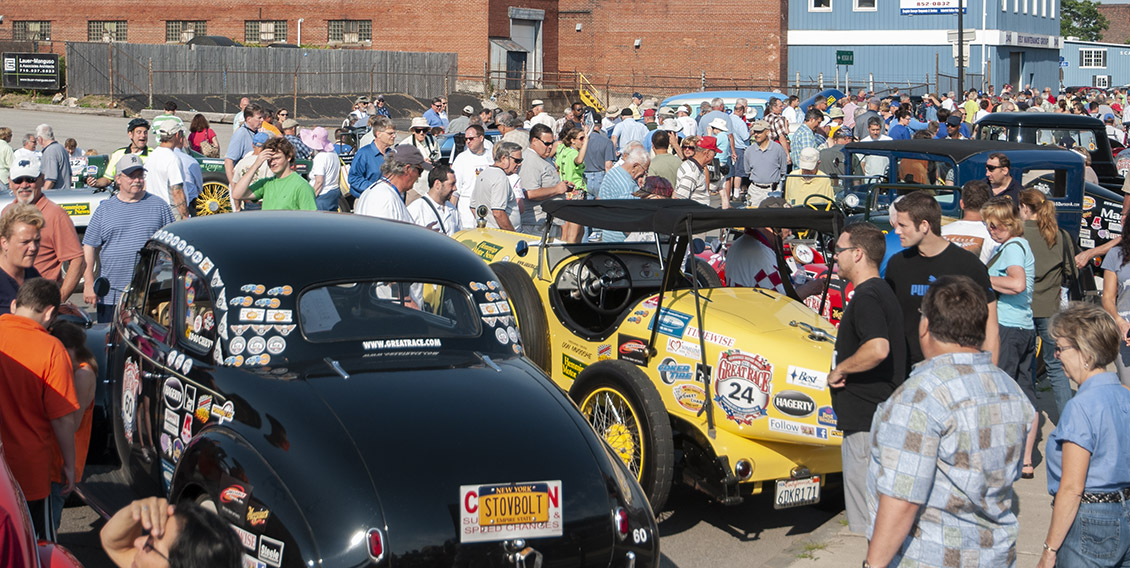 We will see a lot of great sights on the 2018 Great Race, from the rejuvenated downtown of Buffalo and the shoreline of Lake Erie, to the rocky coast of Nova Scotia and beautiful downtown Halifax on the banks of Halifax Harbour. But another thing will become perfectly clear right away to every racer in the event and that is we are visiting the hometowns Great Racers every day except one.

It all starts Friday, June 22, on the Trophy Run when the racers pull into downtown Lockport, N.Y. It is the hometown to Team #33, Rick McIntosh, Brent Powley and Keith Wallace. They will be racing again for the first time since 2012 in their 1929 Ford Speedster. Lockport is home to the only double set of locks on the canal, and you will be able to see it during the stop there.

After the start on Saturday, June 23, at the Pierce Arrow Museum (highlighted by grand marshal Wayne Carini and his own 1916 Pierce Arrow), racers will make their way to the first overnight stop in Fairport, N.Y. It is the home town of two race teams  two-time Grand Champions Howard and Doug Sharp and frequent participants Dave Coon and Lex Sleeman. Fairport is on the Erie Canal (be sure to check out the cool bridge at the finish line) and was the winner of the Best Lunch Stop on the Great Race in 2012. Dinner that evening is a local favorite  something called the Garbage Plate that Howard says will be the best meal you have ever eaten.

Day 2 ends in downtown Troy, N.Y.  home to Uncle Sam  and also home to Great Racers John Corey and Dale Kasson. Troy, which sits on the Hudson River, is planning one of the largest events we have ever had on the Great Race, including a local car show, live music and lots of vendors.

The following morning, Monday, June 25, we will be in the hometown of title sponsor Hemmings Motor News and Jim Menneto and his new navigator Stephanie Sigot. It will be our third time to have a stop in Bennington in the last eight years, but this will be the first lunch stop in Hemmings museum. In addition to be able to see the nice collection of cars in the museum, racers will be able to visit the offices of HMN on a work day while everyone is busy getting out the next issue.

Later that same day as we roll into downtown Burlington, Vt., on Church Street Marketplace, racer Steve Boutin will only be a few miles from his home in Essex. His driver, Terry Riggs is from nearby Jeffersonville, Vt. The governor of Vermont, Phil Scott, is supposed to be on hand to greet racers. He is a huge Great Race fan, as well as a late model stock car champion driver, and he waved the checkered flag at the finish of the 2011 Great Race in Bennington when he was Lt. Governor.

On Tuesday, June 26, the Great Race will enter the great state of Maine for the first time since 2014, and there are five teams from that state in the race this year. The overnight stop is in Gardiner, the hometown to Peter Prescott and the Maine Boyz team in car #78. Support crew members will get a peek at Peters private collection in the afternoon before the racers arrive, and race teams can go by after the stop in Gardiner. Peters collection includes an example of every V8 Ford convertible made from 1932-53. One of Peters drivers, Ed Chapman, is from nearby Auburn.

For lunch on Wednesday, June 27, the Great Race will stop at the Owls Head Transportation Museum in Owls Head, Maine. The participants will be treated to lunch outside while vintage aircraft fly above. Owls Head is the second museum in as many years to field a team. Last year it was the Gilmore Car Museum and their 1935 Packard. This year it is Toby Stinson from Owls Head and his navigator Aedan Jordan in the museums 1935 Ford Phaeton.

Lunch the following day will be at the Seal Cove Automobile Museum, which is home to Peter Brown in Car #43.

Friday, the day we cross the border into Canada at St. Stephens, New Brunswick, is the only day we do not stop in the hometown of one of the racers. But Rothesay, the lunch stop, is the hometown of Great Race volunteers Lloyd and Linda Hodgin. In addition to being Bill and Carolyn Crokers support team for many years, Lloyd has headed up our lunch stop setup crew for the last five years. Bill and Carolyn lived in Saint John, New Brunswick, many years ago when Bill worked for an oil company there along with Lloyd.

Saturdays finish will be in Dartmouth, the hometown of rookie racers Scott and Cheryl Fraser. Dartmouth is just across the harbor from Halifax and the finish the following day, and support crews will enter the venue via ferry from the hotels on the opposite side of the harbor. Although the finish line in Halifax can been seen from the Saturday night venue in Dartmouth, racers will travel more than 100 miles on Sunday, July 1, before arriving at the Waterfront Warehouse in Halifax. That great city is also home to another rookie team, John and Denise Beaulieu. The Great Race has been selected at a Top 10 event for 2018 in Nova Scotia, and the finish falls on Canada Day, which will conclude with fireworks over the harbor after the Great Race awards banquet ends. A special after party, which is open to all racers, support crews and staff, will take place at the hotel following the banquet and the fireworks will be visable from that location.