Kirkwood, Missouri is Ready for the Great Race! 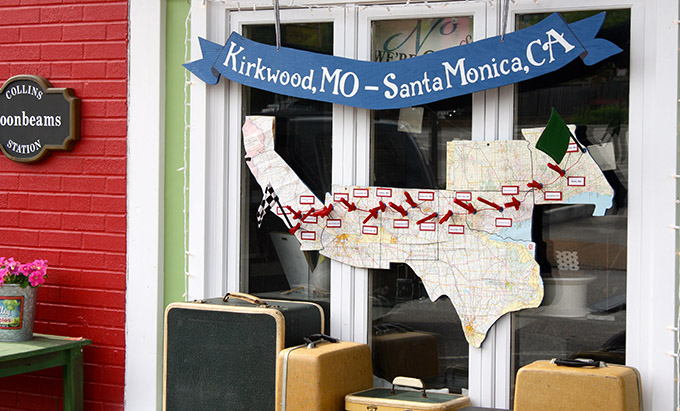 Cities from Missouri to California are getting ready for the 2015 Great Race, including Kirkwood, Missouri, the Route 66 city which will hold the start of the event June 20. Downtown Kirkwood stores, like the one pictured above which has decorated its windows with a Route 66 map and vintage luggage, are going all out to welcome Great Racers from around the world. Most racers will arrive by Wednesday, June 17, but some will start rolling into town as early as Sunday.

The first official function of the Great Race is a Wednesday night reception at Mark Hymans classic automobile collection and dealership. That will be followed Thursday with registration and tech inspection (at Scott Brandts MotoeXotica classic car dealership) and a dinner at world-famous Grants Farm (complete with a tram ride through an open range wildlife area).

Friday will be the General Meeting, Rally School and Trophy Run, followed by a 50s themed reception complete with an awesome 50s band called Hudson and the Woo Doo Cats.

Great Race cars will assemble downtown at the Depot at 8 a.m. and the green flag will drop at 10 a.m. Saturday.

One comment about “Kirkwood, Missouri is Ready for the Great Race!”