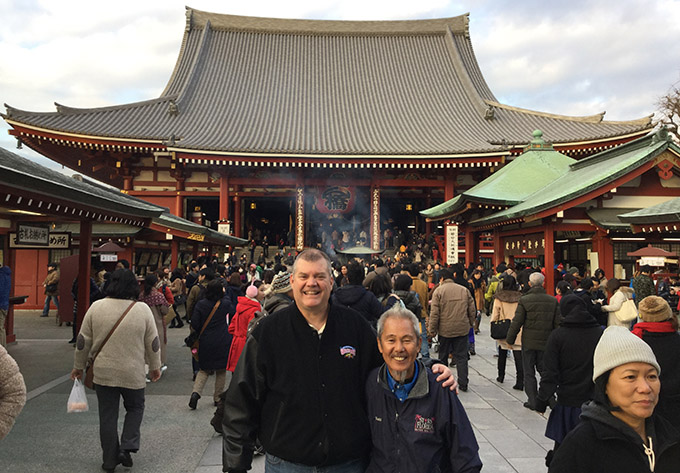 While in Japan recently to visit with 2014 Great Racer Toshi Akasaka and the eight Japanese teams signed up for the 2015 Great Race, I got to enjoy a lot of sites around Tokyo and central Japan. After the Saturday meeting with the teams, about a dozen of us went to lunch at a Japanese pizza restaurant. Bill Brown from Florida, a friend of Toshis who will be helping him with the logistics for the Japanese teams on the 2015 race, and I were the only ones who didnt speak Japanese. But I learned a lot of new words and by the end of the day felt very comfortable communicating with everyone. That night, we toured the Electric City portion of Japan where cameras and video equipment can be purchased really cheap. I only came back with authentic Japanese Pokemon trading cards for my son Hudson for his 9th birthday. The next day we boarded the Bullet Train for Nagano, home of the 1998 Winter Olympics. As someone who likes speed, I was very excited to ride on the 200 mph train. What an amazing treat to experience how smooth the ride was at such a high rate of speed. And it was a great way to see other parts of Tokyo and surrounding countryside.

We arrived in Nagano, which is the hometown of Toshi Nakajima, best friend of Toshi Akasaka. We call him Toshi 2, and you will too on the Great Race this summer as he will be helping Toshi 1 and Bill Brown with the eight Japanese teams. Toshi 2 invited us to his home for what turned out to be one of the best experiences of the entire trip. I got to enjoy a typical Japanese Sunday lunch in a typical Japanese home. And, yes, we took our shoes off but we did not sit on the floor. Toshi 2 is a very much a car guy and has a shop in Nagano building fast cars. And his wife, daughter, son-in-law and grandchildren were wonderful.

Later in the day we headed to the mountains to see the famous Nagano Snow Monkeys. We had to hike two miles along a frozen trail to get there. These monkeys live in the trees at night but spend most of the day in the hot springs. Toshi 1 arranged for us to stay in a lodge in the wilderness where the snow monkeys live. We got into the hot springs at the lodge, but it was too hot to stay in for more than a few seconds. The monkeys didnt seem to mind the hot water. The night, we had a traditional Japanese dinner, and we did sit on the floor with our shoes off (and I started to perfect the use of chopsticks).

The next day we took the Bullet Train back to Tokyo and spent the evening at the intersection downtown that the movie Tokyo Drift was filmed. It was billed as the Tokyo Times Square. I was so comfortable with Tokyo and Japan when it was time to leave I look the train to the airport by myself (which is saying a lot for this Southern boy who doesnt like big cities and doesnt speak or read Japanese).