More stories from the road from Jeff Stumb, Director of the Great Race:

After spending four plus glorious days in Canada, it is back to some more familiar territory in New York state. While in Canada, we had to get used to buying gas by the liter and eating at Tim Hortons (sort of the Wendys of Canada). I learned what a Looney is (the nickname for the Canadian one dollar piece), and a Tooney (the Canadian two dollar piece). Since the Great Race has never been to the Upper Penisula of Michigan nor the first several days in Canada, the route will be all new roads for Great Racers. And only a few, like Curtis Graf and Dave Reeder, would have participated back in 1995 when the Great Race started in Ottawa to recognize any of the roads outside Canadas Capital City. Of the 19 cities hosting the 2012 Great race, the event is returning to only four cities for a second time (Franklin, Pa.; Mansfield, Ohio; Findlay, Ohio; and Dearborn, Mich.). And all of those were pit stops back when the Great Race last visited.

The first stop of the day was in Fairport, N.Y., home of Grand Champions Howard and Doug Sharp. We could not circle the Great Lakes and come into that part of New York without stopping in Fairport, which has been made famous in car circles for years by the Sharps. As expected, Howard had what seemed like half the town turn out for the meeting to discuss the stop  everyone from the mayor to the TV crew from nearby Rochester. The Erie Canal cuts right through town and lunch will be on the banks of the canal in a spot not too far from Howards bicycle shop. 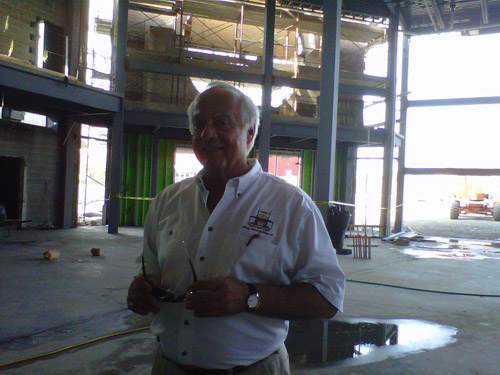 Jim Sandoro standing in the new addition to his Pierce-Arrow Museum in Buffalo, New York.

It was late afternoon when we pulled into Buffalo and got our first look at the fifth  and last Great Lake  Erie. Buffalo is a wonderful city and they were riding high because the hometown Bills were 3-0 in NFL play. Jim Sandoro met us at the Pierce-Arrow Museum where the stop is going to be. Jim is rightfully proud of the new addition to the museum, and if all goes well the Great Racers will be the first to dine in the new spot right next to the museum.