I mean the Great Race for 2018 is DONE. Congratulations to Jeff & Eric Fredette (our rookie mentors way back in 2006), who won the Grand Championship! Congrats to all the winners of their classes. And congratulations to all who finished this tough, bumpy-road event. Special, very appreciative thanks to the many good people in the support and scoring crews. And thanks to our host cities and the people who came out to cheer us all along. We had a grand trip. Great work by Dale Kasson, Navigator

Today, we made no noteworthy errors! That’s noteworthy! It was almost enough to make us believe we really do belong in Expert Division (NAHHH!). 9 seconds was good enough for 8th place for the day, and 2nd in Expert (only the Fredettes bested that – with a ONE second day). That moved us up in the final cumulative scores to 16th overall (of the initial field of 120, and we rose to 9th among 19 total Experts in the field). We were also 2nd among Studebaker entries, behind Annegret Reichmann & Uli Kammholtz in the ’55 President coupe (whose generator died before the last checkpoint, leaving them to coast the last few feet and finish -whew!). We earned no new aces today, though, so our record of 7 from last year stands, but then we did have 15 one-second legs, any of which might have as easily been an ace.

Halifax had a grand event for us at the harbor waterfront (oh, maybe just maybe some of it was in honor of Canada Day that also happened today). Bender pulled in after an excellent running day, decked out for the holidays and bi-national nature of this event. We had a super crowd, including a visit from Bill Jarvis and his wife Karen (Bill is Atlantic Canada Regional Director for the Studebaker Drivers Club). Which reminds me: once we pass the last checkpoint, the cars are held at a station outside of town, to regroup in order, so that we arrive at the ceremonial finish in town, also in order. As it happened, four of the five Studebakers in the 2018 Great Race parked almost side-by-side! What a handsome lot. 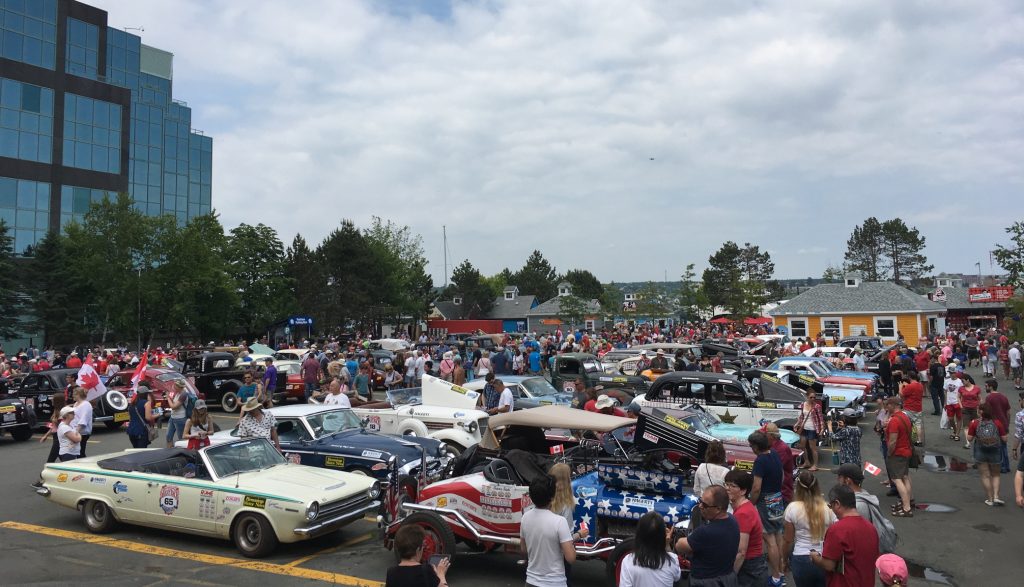 The Parc Ferme and Crowd at Halifax Finish 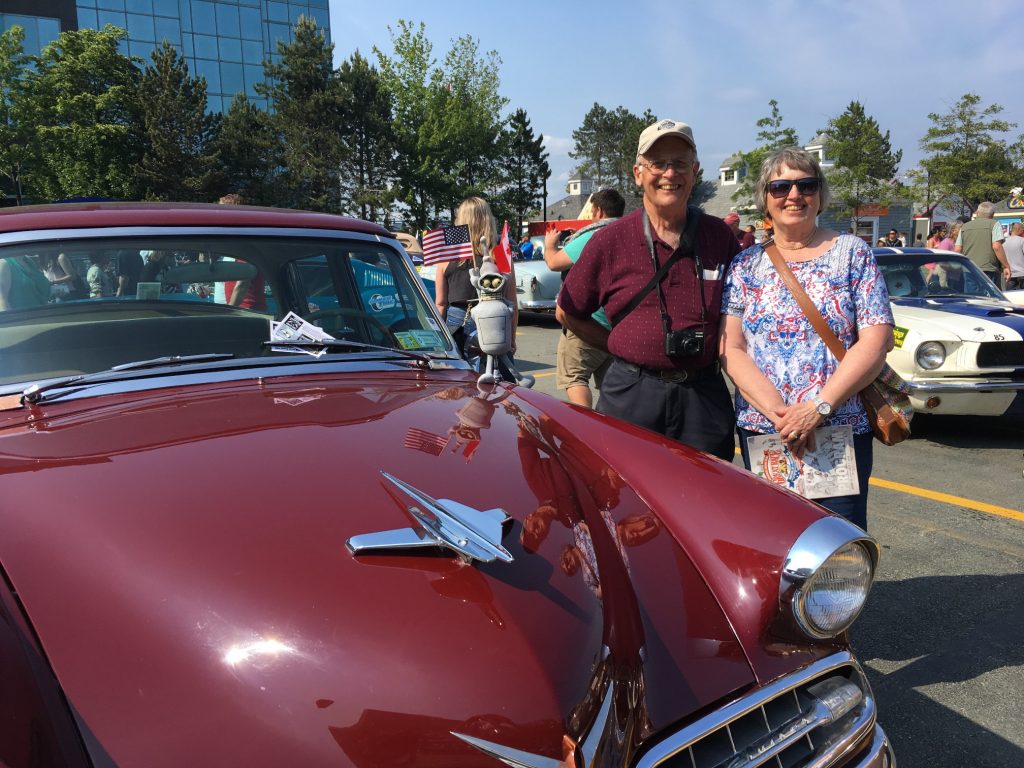 Jeff and Eric Fredette, wonderful fellows (father and son), who always came with Jeff’s dad (now gone) and mom Lida and sister Kim, took the big prize. They were our rookie mentors in 2006, and after 13 years, they finally won (after missing by seconds in other attempts). Congratulations, guys – congratulations to a grand family. 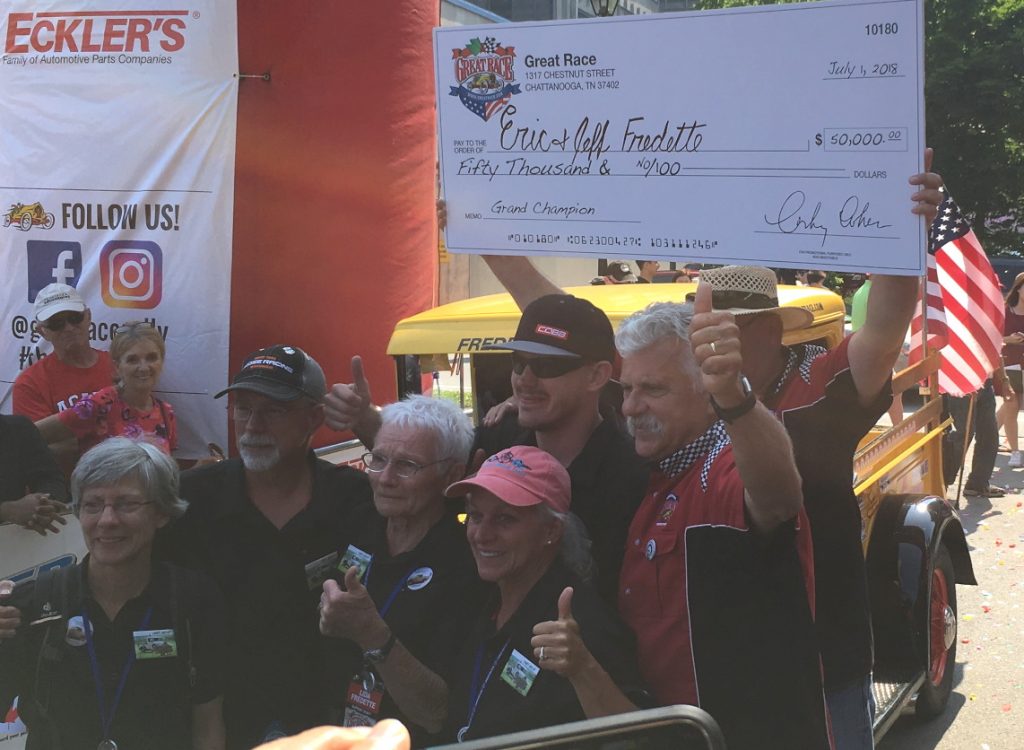 Fredette family (unfortunately minus Pops): They won it!

The banquet was excellent. As expected, Don Henderson, who used his car to stop another with brake issues from careening off Mt Washington, won the Spirit of the Great Race, perhaps the most coveted of all awards here. Well deserved. 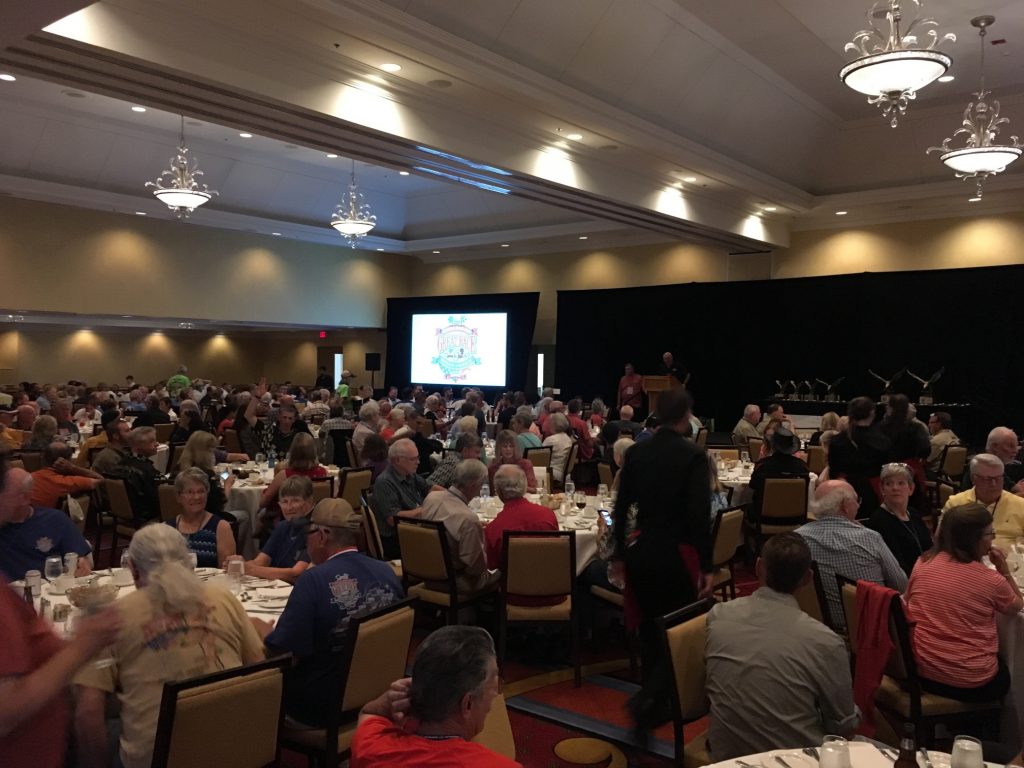 The Awards Banquet (Well, actually just half the room – 500 people)

At the afterparty, Ed Overmyer passed the Pink Monkey to Bill Croker. I explained a bit of Bill’s travails in my earlier post. His usual Packard had suffered a block crack in the Spring and not been ready for this race. So the Crokers ran in a borrowed car, which blew a hose and so lost all its coolant. Then the wiring for the lights failed so they couldn’t get gas for the next day. Then the clutch failed, leaving the engine unattached to the wheels. Lots of trouble, indeed! 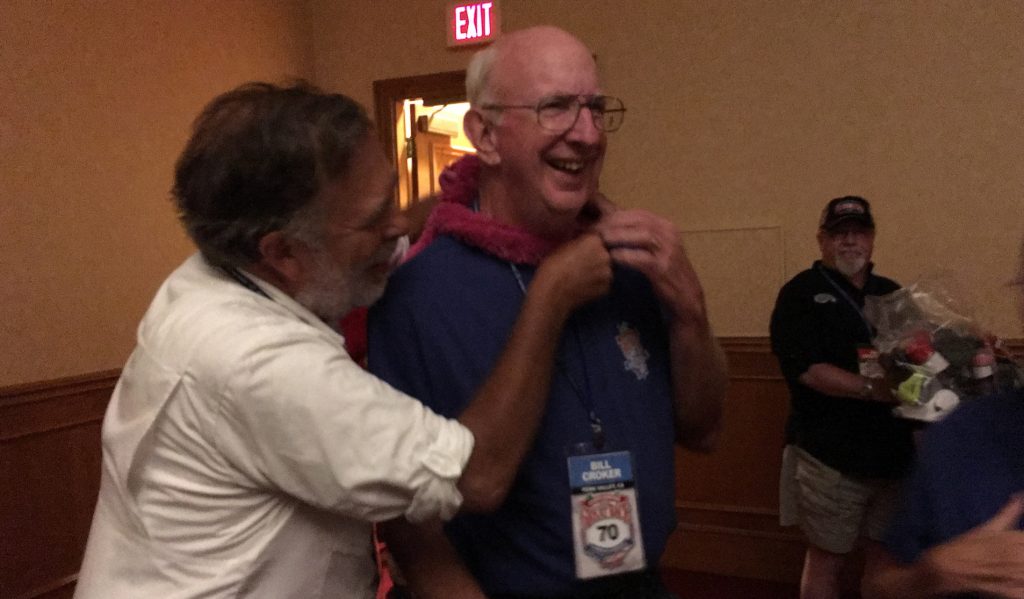 Bill Croker gets the Pink Monkey award for Most Mechanical Troubles, by 2017 Recipient Ed Overmyer

After that, they set off the fireworks (might have been for us or Canada Day – Who can say, really). We said our good byes and retired for the night. 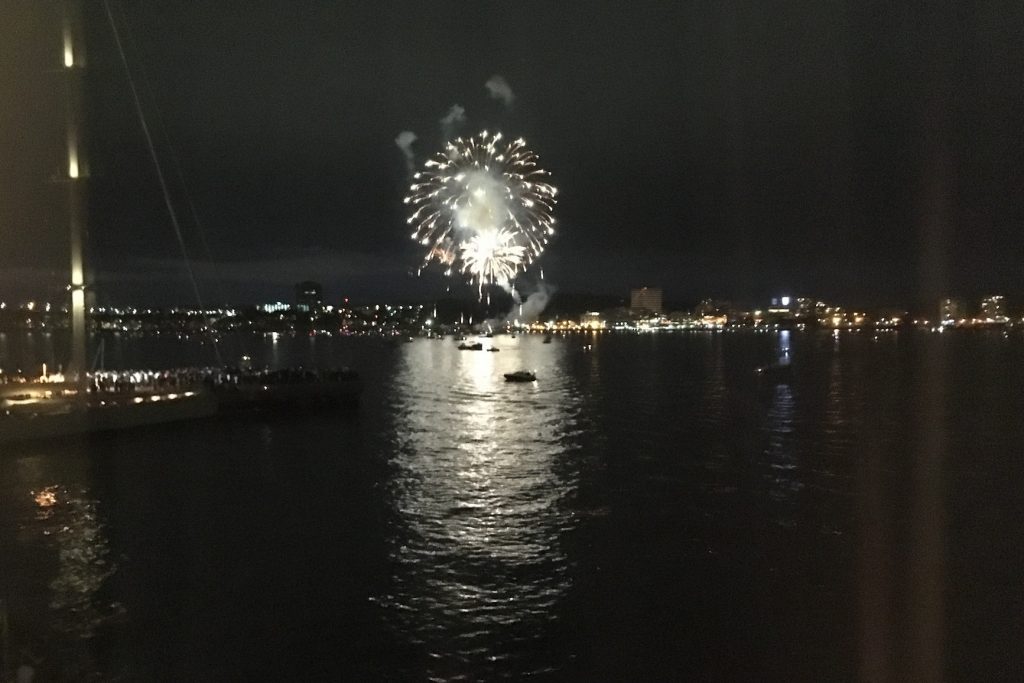 Fireworks over Halifax Harbor, in celebration of Canada Day!

What a thrilling, challenging, and nearly successful run we had! We can point to just one or two errors that kept us out of the top 20 and maybe even the money! But that’s AOK – still our personal bests. We made it, hardly ever even got dirty! We competed, cooperated, connected, and had a wonderful time. Now another 600 miles, and I’ll be home.

In closing, here’s the song I thought up (during some long, steady stretches), with apologies to George Gershwin who wrote the original version:

See these old cars?
They’re the real stars,
and when they go far,
who could ask for anything more?

We’ve seen places,
won some aces.
In Great Races,
who could ask for anything more?

Now it’s ending,
time for mending,
and homeward sending,
Who could ask for ANYthing more?