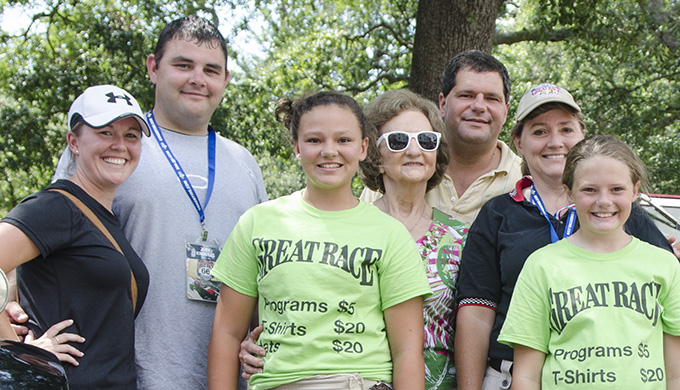 Most of the time, when we mention a “long time” Great Racer, we’re talking about an older person who has been competing in the Great Race for years. In this case, Olivia Gentry (green shirt, center of photo) is a 14-year veteran of the Great Race and she’s only 14 years old. And while she hasn’t actually “raced” in the Great Race, she has been a part of it since 2001, traveling with her mom, Beth. She’s now part of our souvenir sales staff, and she wrote a great story about her family’s history with the Great Race. We wanted to share it here:

I am Olivia Gentry; and I am very proud to admit that I have ventured on every Great Race since 2001. The Great Race has taken me throughout the United States, as well as Canada. The memories I have made while on it are priceless, and something I will treasure forever. I was only 11 months old on my first Great Race, and traveled with my mother, Beth Gentry, who is a long time navigator in a 1932 Ford Cabriolet. My Grandfather, Joe Knowles, accompanied her as the driver in the #66 car. The two made many memories competing side by side together, and became a successful rally team while doing so; earning over 60 aces. My Sister, Genna Gentry, who completed her first Great Race at only 6 months old; as well as myself rode support with my Grandmother, Lurline Knowles.

As I continued to grow my love for the event continued to grow as well. In 2010 my Grandfather became ill, and he passed away on November 10th. My Grandmother, who had been battling breast cancer for eight years also passed away a short time after. It was very difficult loss for my family, and we were overjoyed to hear that the number #66 would be retired in my Grandfather’s memory. For a very short moment we were unsure who would step in for my Grandfather as the driver of the #66 for my Mom.That moment was short-lived as my cousin Jody Knowles decided to step up to the plate; along with his amazing wife Kali who would take us from town to town. Jody, and Beth became a rally team known as Pop’s Passion dedicating the name of their team to the man who had helped them get to where they were not only in the rally car, but in everyday life as well. The two have had phenomenal success, finishing top three in their division every year since.

I was overjoyed that I would get to continue my journey with the race. I was also ready to take a bigger step, and become a bigger part of the Great Race. It was also in 2011 that I decided to become a member of the staff, and I then began selling programs. This year will be my 5th year selling programs, and I am more than happy doing so. It was when I began selling programs that I began to understand the true meaning of the Great Race family. Each and every stop on the race brings a new adventure, and with that a new opportunity to become closer to the other individuals that I have met on the race. With time the people you meet become more than just individuals. They become family.

I can not wait to keep you updated on this years race, and the new adventures we will experience as we travel down the historic Route 66.