Ol’ 61 is back in the barn, and all cleaned up from its run in Great Race 2011.  Its next appointment is mid September at a concours called the 100 Cars of Radnor Hunt, which is featuring designs of Vergil Exner this year – and there is no more Exner design than the 61 Imp.  Meanwhile, I determined to build a proper speedster for future Great Races.  The Awesome Auburn that Chad Caldwell built for this year really got me thinking!  I’d like to do a V12; but some research shows that the only ones existing in affordable quantities are the Lincolns and Pierces.  The Lincolns aren’t very attractive (bad head designs with thermal issues) and they mostly (that is affordably) appeared in 30’s Zephyrs – which SURPRISINGLY are monocoque cars (no separate frame!) – so no good for speedsterizing.  The Pierces weren’t common in cars, but survived for many years more as the engine of choice for fire engines!  How about a fire-engine based speedster?

Well, in fact, Pat n’ Pat Brothers (who are not brothers, but husband and wife), long-time Great Racers, are offering a 1932 Buick Model 50 straight-8 chassis.  Hmmmmm….  It has artillery (wooden spoke) wheels, and an 8 is somewhat lower on the coolness scale than a V-12, but in vintage-land – maybe not (after all, V-12s are still made today, but NOBODY makes a straight 8 now!).  Dave, who lives just down the pike a bit from PnP in Oregon visited, drove it, and seems to think it’s not crazier than most of my projects.  OK, it’s a deal!  We’ll build our new speedster on the Pat n’ Pat Buick!  Here’s what it looks like: 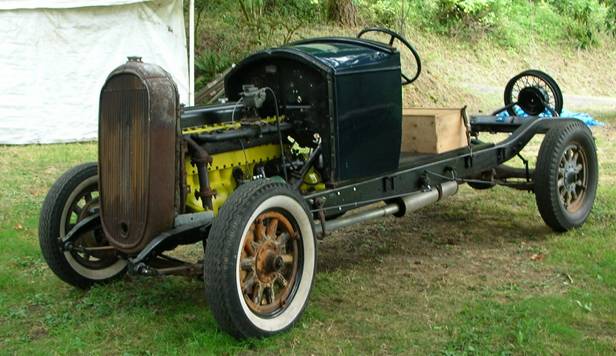 The cowl is from a ’28, but they included it, so we’ll try to find a use for it.  We arranged for transport, sent PnP a check, and cleared a space in the barn.  Now to begin the design process.