Ahhh. The sweet cool of the mountains. Today we ONLY climbed to 1700 feet (the crest of the Blue Ridge), and chased the Blue Ridge Parkway and other windy country roads up from North Carolina and into Virginia. Beautiful, cool and shady; the B.R. Parkway is as different from I-81 as any two roads could be. I-81 is so open and wide and flat and FREAKING BORRRING that most deaths there are from sheer boredom or deafness from the truck tires howling. The parkway is as close and twisty as an ivy vine on a lamp-post (or some of the kudzu that covers many of the lower slopes in these parts). It was quite a challenge swinging 20 feet of wide-body Imperial around these little notch curves with radii smaller than the cars length! AND AT EXACT SPEED (even if that speed was only 25)! WE ran top down as the morning sky was so open and lovely- right choice! Dave likes the shade of the (black) roof), but I call it his wimp-rag. The parkway was so well shaded (and up a bit) that sun was no issue, except to add spatters of dappling through the forest canopy, so we couldnt see the landmarks and signs TOO easily. As we cut close to the rough stone inside the tighter right-handers, I asked Dave to reach out and pick us some salad from the greenery on the rock! No such luck. We had some chances to prove our new time-adjustment methods, for when the required speed just CANT be maintained. We got stuck behind another car that should have been a full minute ahead. WE suspected he was running slow, as he has only the original speedometer in an old English car , while we have the de-rigeur digital rally speedo mounted over the dash (we were much abashed at days end to find they had a better score than we did on that leg). Still, there was a time when we were gaining on them and coming so close that we had to slow and figure the delay, then recover later. It was even trickier when were slowed by a bicyclist (brave soul!), then during our recovery (running fater than required to undo the delay), we were interrupted by a truck pulling out, so we had to quick add a new delay in the midst of the ongoing correction. Fast math required! I think it turned out OK, but exciting! We ran a looong leg and a short one and descended into Galax,VA for a lunch break. 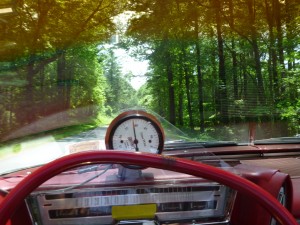 The afternoon was hotter, with a special treat of a challenge at the start. The start was on a 4-lane highway, adjacent to a gas station. Just as we arrived, a VERY local downpour opened up (yes we had raised the wimp-rag (sunburn is one thing  wet leather quite another!). We couldnt see a thing (slow wipers at full speed, but really in this kind of waterfall, there is no wiper that can help much). Some of the open cars just pulled over, rather that crash blindly into whatever might be in front of them (a reasonable response). We pushed on and the edge of the storm was just hundreds of feet away, after which hardly another drop! Sadly, we then missed a cue and turn, sending us several miles off route, so far that we had to write off that leg. WE backtracked and picked up that checkpoint over 20 minutes late. Whoops! Fortunately, the clock starts again at each checkpoint, so we could run the following leg and try to forget that one. We can, too, because the worst leg each day is dropped from the final scoring (except on the last day of the rally).

I had a headache so I started chewing gum to ease it. It wasnt long beforeI managed to bite my cheek, proving that I cant chew gum and drive rally at the same time!!!

We ran down along the New River and it gorge, through tiny Allsonia, VA and twisted the mighty, massive Imp around some of the tightest, slopingest, twistiest little roads I have even ridden. I have NO idea how they ever paved these things  the paving machines I know about could never have twisted that much! Fun stuff, though I do wish I might try them some day in a smaller open sports car. This area is biker heaven for the same reason. Sadly, for them and local motorists, our set-speeds were always a bit lower than the speed limit. Thats no big deal if were going 50 in a 55; but when were going 20 in a 25; they do seem to pile up behind us a bit. We took to calling all the non-competing drivers muggles because we know they are caught up in and even they cannot understand.

We saw our first roadside viewers today. The cross-country run in 2006 seemed to have such folk everywhere, out in lawn chairs to watch the rolling car show go by. WE missed them yesterday and wondered if we would see them. Indeed we did today. My favorite are the littler kids that get so excited as we roll on by things they have never seen!

Ol NO XQS ran pretty well today, but I can tell theres one (or more weak cylinder). Theres a real lope at idle and pulling a steep hill in low gear I can feel the uneven pulse. One local pointed out tome that it may just be a vacuum leak, as the tap for the brake booster is right over the #8 runner. At a break, I tried plugging the hose but it still seemed just as lumpy at idle (I did NOT try driving it without boost!). I think we just have to live with it for now and hope it doesnt do too much harm. Any IMLers out there have any suggestions?

The brakes also gave us some trouble today. The left front is getting grabby and draggy again (same thing happened in 2006), so SOMEtimes, the car darts left on a first, fast poke at the pedal. IT sounds lumpy on a hard pull-down, too. Not too pretty, but no extra drum in the trunk, so this, too, is a live-with-it.

On the other hand, I am constantly amazed that I can do this for hours in the Imp and get out with no stiff back. I think modern seats, with there better side bolsters and grippy leathers must hold a body TOO still, so it gets stuck and stiff-ish. Here, especially on the twisty roads, a persons spine and legs have to do that locational work, keeping the head upright and the buns in the chair!

We rolled into the CivicCenter of Salem, VA for the evening show. A good crowd and lots of fun meeting and greeting the folks who turned out. Dear Sue (who let me come do this) went to college here, a few years back. This is not my first stop in this town!

Some pix are starting to appear on the race website (www.greatrace.com). As before, they tend to favor the old-style open-wheel racers, but its worth a look to see some of our Fellow Travellers and their rides. We often meet up with photographers at strategic spots along the way. We wave. There is also video footage being shot, though as yet, there is no airing scheduled.

Tomorrow is a later start for us: we drew #45 in the order (full breakfast for us!). Well be in Harrisonburg, VA for lunch, and expect to see Sues Dad there, over from his place in Charlottesville. Then we cross into the 4th state of this rally, ending in Cumberland, MD. I once ran those roads just for fun, MANY years ago. Well see if I can do it again, but on the clock now! And no gum chewing allowed!