Well, for a couple of alleged veterans, we sure made some rookie flubs today! After a morning clean-up session (bodies and car), we sat the de rigeur Rally School to get reminded of all the details of doing this sort of event (at least from the competitors perspective  a tiny part of the total scope of the requisite organization and effort to plan and put on something of this scope. Thanks to Corky Coker and Jim Menneto (of Hemmings) for making it possible, and to John Claussen, Rally master and his staff who do the work of thousands for making it real. 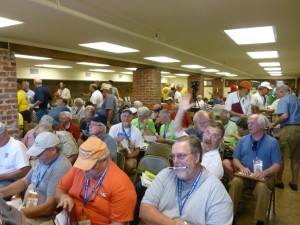 Today was a trophy run, a kind of one-day practice rally, with its own placing and prizes. We had five legs (Well, not us, the rally had five legs, as measured by the secret checkpoint locations along the way. We wound through the hills above Chattanooga, going up to the overlook at the Raccoon Mountain Pumped Storage facility, where there is a huge 500-acre lake high above the river, with pump-turbines that move water up to fill the lake at night (when electricity is cheap) and run it back through the turbines to produce electricity in the afternoons, when demand and prices are high. The vertical lift (for both water and our cars running today) is about 1,000 feet, and the station can produce over 1,000 Megawatts (about like a typical large nuke) for over 20 hours. We had to hold very low speeds (18 mph) over much of the access road up AND down the mountain. Thats not easy for us, as its near the flat-land creep speed in Drive. Even in 1st, it needs miles of steady braking on the way down. Several cars didnt make it. We saw at least 3 waiting for the sweep truck.

Side note: NO XQS is 50 years old this year. We are not the newest car here (of the 60+ competing, there are two or three between us and the 1969 cutoff), but this Imp is just one half the age of the oldest car here, a 1911 Velie. Those guys are riding something like a powered buckboard!

Another hot and sticky one today, and the lower speeds provided little breeze. Fortunately, many of the roads were in the hills, with heavy tree cover, so there was some break from total sun.

We are given a start time each morning, based on a random draw for order, with each car leaving in turn on one-minute separations from the start line. That start line is usually a few miles out of town, so as not to clog up the works where the roads are crowded. As this first day began in the afternoon (after the school and prep hours), we left from a lunch restaurant to go to the start point. Alas, we misread the directions right away and missed that the start was 1.5 + 10 miles (two instruction steps), not just 1.5 miles from the restaurant. By the time we realized the start was not that close, we knew we would be many minutes late for our turn at start. So we raced ahead (at full legal speed of course), and managed to pass several cars that should have started behind us, before we met the first checkpoint. Bleahhh. We were still over 3 minutes behind. The next leg timing starts from there, so deep breath  go again fresh. And we did. We had a 2-second leg, a 7-second leg, and then we missed a turn! Fast thrashing about enabled us to hold that one to just a 23-second error, helped by the fact that we were between two other cars that had skillful drivers, and could tell about where we should be relative to them, even though we hadnt got there by careful rally work ourselves. Then the last leg was another 2-second score. So, if we can avoid the errors, we can do this pretty well.

Back to the hotel. There is a definite miss at idle I want to check. Dinner and charity auction and awards for the days run were given in the museum at Coker Tire Co. They have lots of cool old cars and motorcycles  I hope I can post this later with pix you can see. No, we didnt win anything. Our total score was several minutes off the pace, given that disastrous first leg. The first place went to a team with a total 2.1 second error today. 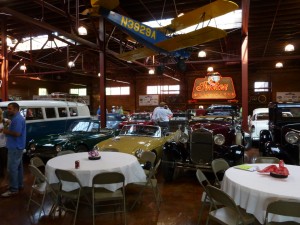 One Small Bit of the Coker Museum (Dinner Tables Not Typical)

I checked the plug leads, pulling each one off in turn. All had good jump spark at the distributor terminals, but one did seem like it was not inserted fully. Maybe thats the source of the miss? It seemed better after I re-set all the terminals there, but well see We also have that weird gauge problem: they always come up with the ignition, but either stay on a while or drift back to their off positions within minutes. AS disconcerting as it is to run without temp, oil pressure and fuel level info, its too dark to tear into it at night. Maybe tomorrow

Sad news from home  a very sick pet, and we just lost one last month, too. Super Sue says to keep going, though.

We start for real at 7 AM, the first leg toward Vermont! IF the miss doesnt get worse, we should do well.