For those of you who have forgotten (or not recently checked the story of our 2006 race on the club website (http://www.imperialclub.org/Yr/1961/JohnCoreyNoExcuses/Page01.htm); our car “NO XQS” is a 1961 Imperial Crown convertible, in Alaska White with Red leather and a black Stayfast top. It was bare-metal restored in 2006, so reliability is our secret weapon in the Great Race. We proved that again today, running over 600 high-speed miles, mostly down I-81 (with about a million tractor trailers). We have a John ‘Duke’ Wayne thermometer in the car that we picked up out west during the 2006 race and he told us it was up to 102F today. Humidity was only about 2 or 3 points lower! We ran with the top up for shade, but the backlite down and side glass trimmed for maximum flow-through, to blow away the sweat. OF course that works ONLY when moving at high speed, and as we started the day in Pennsylvania (where road construction is the official State Pastime); some poachy periods were spent inching along between the trucks in one-lane repair zones.

No matter! We are Great Racers, after all. Out of PA, quickly across MD & the turkey neck of WV, into the Old Dominion (my home state, long ago). Down the long Shenandoah valley by the great spine of Virginia, the Blue Ridge  past some of my long-ago teenage haunts (Luray caverns, Newmarket), all the way to Blacksburg (sisterly alma mater) and Roanoke (wifely alma mater), and finally to Bristol and across into Tennessee (of the whole 900+ miles, about 500 here in VA).

Before our brains were parboiled, Dave and I geeked out by working through some interesting product design and business deal challenges. Interstate travel is so mind-numbing otherwise!

We met one little downpour, but we met it three times! It was one of those brief, waterbucket summer dumpers; and we blasted through it (almost blind from the truck spray and slow wipers). Our planned gas stop appeared from the mist and we pulled off into a looney multi-directional (uncontrolled) little intersection that really flustered me, still dazed from the waterblindness. WE gassed up and shot back out, but in my confusion, I picked the northbound ramp (hey, it WAS a confusing intersection!). Fortunately, the next-up exit was just 3 miles, so the time delay was minimal. The drying delay was significant, though, as the storm had not moved so we got two more passes through the downpour!

The good news is the sun was off the boil, with its descent and our ascent into the hillier country. The Duke claimed it had dropped into the high 80’s and likely so. We rolled into Chattanooga and found the hotel, its lot already full of other Great Racers, around midnight: an 18-hour, 600+ mile run today. Whew! And not a single mechanical issue well, except for the rattly exhaust (must be slightly displaced from changing the manifold gaskets). Also the 12 V instruments (gas, oil, and temp) dropped out once or twice (there’s a sneaky and arbitrary bad connection behind there somewhere), so we had to track the odometer for gas range. Of course, they were fine again by the time arrived. Our cloth top is also stretched from the hours of intense buffeting by the passing trucks. But nothing that could or would interfere with Great Race activity! Look out, you others!

As Dave noted, the real rally back to Vermont should be easy: we have a whole week to do it; whereas we just did the whole distance in a day and a half, and backwards – like Ginger Rogers in heels!

Met up with Pat & Pat Brothers in the hotel lobby. They’re running the auction for autism tomorrow, we threw in a case of Bully Hill ‘Love my Goat’ red wine from NY state  seems fitting for a race mostly run by old goats like us, eh? 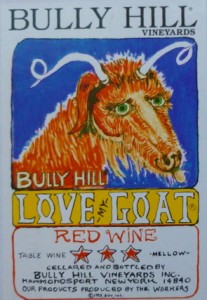 The Art of Wine Labels has Come a LONG Way!