Well, as I write tonight, we are back in New York, but just barely (I always figured Binghamton was kinda Pennsylvania leaking over the line into NY).  We had a solid but tiring day.  The  course ran through western PA with a minimum of loops and turns, so it was mostly longer runs – a driver’s day, with the navigator more limited to calling speed changes and sign watching.  This part of Pennsylvania is a hill-and-valley folded remnant of the ancient collision between the African and North American tectonic plates  kinda like when a Hummer hits a Suburban: lots of folds and crumples.  But here, the folds are all parallel and so most roads just run along the valleys, with only the occasional tunnel or pass to jump a ridge.  Kinda limits both the scenery and the options for tricky rally routes (but John Claussen did manage another twister in the morning!).  Highlights for me included breaking over a hilltop to see a massive windfarm on the next ridge  I don’t know why some folks think those are ugly. To me they are a part of a beautiful future, and it’s really inspiring to see them whirling and turning the very breeze into power.  The highest point today was Red Rock Mountain, at 2449 ft.  The road up and down had some heavy traffic and a lot of our racers got caught in the slow traffic.  There were lots of time-adjustment allowance requested today (that’s used when safety or unavoidable delay occurs, but only in 10-second increments, so there’s no fine tuning that way!).

A straighter, longer-run route is not too bad for a car with bad brakes!  We had to make it to Binghamton with our cracked drum, so we drove with our modified technique  LOTS of engine braking.  I was a little less cautious today, because yesterday’s experience gave me a feel for just how hot I can get this wounded wonder before it goes off in left field (literally).  Careful attention to the pedal feel reveals early brake fade, before the heat is too much, so I increased my use of brakes today, where short applications were helpful, but we still kept to the transmission as the main tool for long grade management.  Learning every day!

We crossed the Susquehanna river and recrossed the Wyalusing creek (many times  we  ran up this little valley for the pleasure of its skinny little bridges.  (Silly aside question:  If you lived in the Wyalusing Valley, what would you cheer for your high-school teams?  “Wyalusing! Wyalusing!”?  Wouldn’t “Tryawinning!” be better?). Holding concentration is a major challenge for us.  Maybe it’s the sun, or the long ride, or just because we’re old guys, but each of has had to really work sometimes at keeping attentive.  Mostly, we’ve caught each other, four eyes and a brain and a half being better than two or one).  It’s not that we’re falling asleep (well, at least not me), but we do fuzz out and can miss a sign or marker and that can wreck our score. So when we get like that, we add in some noise that doesn’t draw us to another topic, but keeps us more alert.  I sing.  It’s not a pretty thing, but it works.  It helps that I know about every other pop song ever written, so no repeats are required on a week-long ride.  I also added a new trick.  Dave gives me the next speed change, soon after we complete each maneuver.  Sometimes (no, OFTEN), that next one comes many minutes later.  Meanwhile, I’m watching our speed, steering the boat, worrying about brakes, traffic, and the terrain.  Do you think I usually remember the new speed when we reach the trigger time or marker?  Um, Nope.  So, I changed how I use my special speedo mount (that’s for the speedometer, not a swimsuit, OK?).  Our special Timewise rally speedo has a round body mounted above the standard dash in a clear plexi bracket.  That lets me rotate the rally speedo, so any speed I choose is at  12 o’clock.  It’s a LOT easier to keep the needle there than anywhere else (peripheral vision is all I need, so I can better watch the road).  But today, I took to turning the speedo to get the NEXT speed straight up, at least in the shorter segments.  Then, when the trigger came, I could see what speed I needed to change to, and that allowed a better-timed transition with less confusion at the critical moment.  More learning every day!

You may recall the hard hit in a corner culvert I noted yesterday.  I may have spoken too soon to say the damage was merely to pride.  Today, the right rear (yep, that’s what went down the drain) started to produce a regular clicking under power, and then the clicking grew to be most of the time.  Hmmm that sounds a lot like a wheel bearing going south (and we’re SUPPOSED to be going North!).  It may be that the bearing took some of the culvert shot and is slowly deteriorating.  I think it will hold for the next two days, though.  I hope so, because pulling the back axle for a bearing change is NOT a roadside process.  If it goes, we’re done.  Keep your fingers crossed!  I tried to be gentle to it, but I’m still having occasional trouble reading turns that look like they might be taken without slowing (the goal is equivalent to no slowing, but we often stop and figure a delay that we then earn back afterward by running overspeed).  Today, I took one left sweeper going in at 30 and out at 35, thinking I could do it without slowing.  It was tighter than it looked.  I did it, but only by employing some real four-wheel drifting.  Fun, but limited in socially redeeming value (please note: no locals were harmed in the making of this YeeHah!) and also not too helpful for the ailing bearing.  Oh well.

We had some other um mechanical ‘issues’ today.  Perhaps the most exciting was when the hood latch popped open while underway (did THAT get loosened in the culvert hit, too?).  I’ve always thought that back-opening hoods make good sense, but we don’t have that on this car!  Fortunately, there’s the safety latch (which held).  Unfortunately, the chromed center-hood windsplitter trim piece didn’t get the joke: it’s fasteners popped off (tinnerman nuts on cast pins!).  We whipped into a bank lot and brought out the universal repair kit: DUCT TAPE!  We traded a bit of elegance for a lot of security, so we don’t lose this piece and take it right through the windshield!  We didn’t have to take a time allowance, because we were running in a transit, where we need only arrive at the next starting point by a time certain.  Still, we had to hurry!  That wasn’t made easier by a bystander who insisted on asking question after question while we fixed the hood.  Despite repeated apologies for our rudeness, he missed the hint and pressed on with more queries.  Jeez! We finally had to just shut the doors and go. Sorry, sir!  I managed to lose my sunglasses in the melee (I already lost my main pair of specs!).

The exhaust note has changed today, with a distinct puff-puff-puff under heavy loads.  Just before the race, a leaky right manifold gasket was changed.  I suspect it is going again  perhaps that manifold is warped?  On the other hand, when that was done, Dennis at Capitol Mechanics also throttled the heat riser passage in the intake by trimming down those gaskets to choke the duct there  that has completely cured the knocking we had seen before during hot weather.  I haven’t heard a single ping this race.  I’m anxious to try advancing the timing back to stock (see our 2006 tale, explaining this change) but it can wait til after this race is run.

There are other Chryslers and even another Imperial in this race.  Car 62 is a lovely 1928 Chrysler 72 roadster (team Howe & Fisher).  Car 44 is a 51 Newport, set up in period form for Carrera Panamerica service (very cool, team Auerbach & Auerbach).  We also have a ’66 Charger, but that’s it for the MOPAR brands, unless you count the Hudsons (merged via AMC into Chrysler).

We lunched in Hazleton, PA and had the best dinner show yet in Binghamton, where again key downtown streets were closed for the display.  A really big and enthusiastic crowd greeted us.  There was even an Imperial in the local attendance (’65 4-dr Crown).  At the extreme end was a turbine-powered T-bucket hot rod.  Wild!  Good band, too!  A really nice effort, Binghamton  you’re giving Cumberland, MD a run for their money as best stop yet.

After dinner, we broke early from the parc fermé to start our repairs.  Ethan had shipped our replacement brake drum and it was waiting for us at the hotel check-in.  We borrowed a better-than-bumper jack from (former Grand Champions) Reader & Stone and set to it.  Ethan had done a masterful prep job:  double boxed, with minor bits bagged and taped to the inner, with a pack list, and inside, all bearing surfaces stuffed and bagged for cleanliness.  We had only to pull the old one, pack the bearings with grease and slide the new one in place.  What a great team!  One of two shoe pivot adjustment screws on the backer is bound up (combination of heat and dust, most likely), so  I couldn’t bring the pedal all the way up where I like it.  Still, we mounted the wheel, dropped the jack, and took NO XQS out for a test run.  A fast series of 6 hot stops showed all straight and all silent.  Sweeet!  Tomorrow will be a LOT less stressful!  We looked more closely at the old drum in daylight and found a big radial crack we hadn’t seen before.  Well, THAT explains a lot! 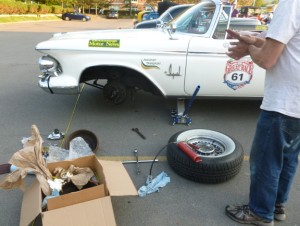 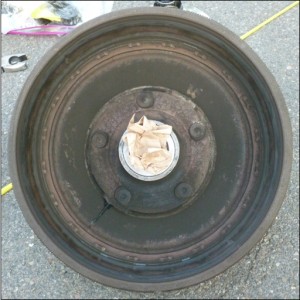 Tomorrow, we are the first car out.  That’s because we’ll be coming in to the Saratoga Auto Museum for the evening and that’s our ‘Hometown’ stop, so we get the honors.  Saratoga is just 30 miles from home (so is our final stop in Bennington, VT, but Hemmings gets top billing there).  This will be fun.  I hope to see some pals there!  If you’re close and free, Come On Down!  5-7PM, at the Auto Museum. Of course, that means we MUST stay on course, so we don’t get late.  That would be embarrassing, so it’s just not going to happen!

Tomorrow, I hope to write a bit about some of our compadres on the race.  This is a great bunch of folks and you ought to know more about them.